East Sussex, United Kingdom, November 16, 2010 -- The four intrepid supporters of the SafePoint Trust - Anna Koska, Nicoletta Iacobacci, Clare Beale and Catherine English - have recently triumphed in their mission to climb Mount Kilimanjaro, Tanzania. And not only have they completed this gruelling challenge in an impressive time, they are also celebrating being the first all-mother group to climb the feared Western Beach route. Congratulations ladies! 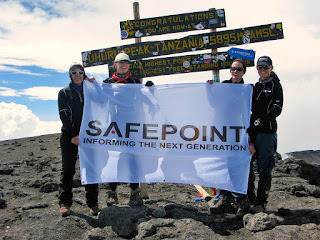 The SafePoint supporters reach Uhuru Peak, Tanzania
But now the hard work really begins. The SafePoint team has begun rolling out a hard-hitting campaign across Tanzania to raise awareness of the dangers of syringe re-use. Using one syringe to treat many patients is one of the single biggest causes of death in the developing world, and causes millions of infections each year in Africa and the rest of the developing world.

On their descent, the ladies travelled to Dar es Salaam where they called a press conference, attended by 25 major Tanzanian TV and radio channels. They informed their captivated audience why they took on the challenge to climb Mount Kilimanjaro, and their decision to raise money to donate single use (AD) syringes to Tanzania. Their climb has raised funds to contribute to their supplies in compliance with the ECSA resolution*.

Famous celebrity and comedian, Masanja, assisted the ladies in the press conference by demonstrating the three-point SafePoint message, taken from the WHO injection safety guidelines as per the diagram below.

Masanja validated the importance of safe injections and said, "I decided to help SafePoint make a public awareness film as I am a proud Tanzanian, and know that in the village where I come from, many people are unaware of unsafe injection practices.

"I hope that this film encourages healthcare workers to use a new syringe each time they give an injection, and that it informs our parents and children on the risks they take if they don’t demand one. To all fans of the Orijino Komedi Show, make sure you never have an unsafe injection again and spread the message for me."

Yet, despite clear evidence pointing to significant numbers of deaths caused by a lack of injection safety procedures in many hospitals and medical centres in Tanzania, talks to date with Health Ministers in the country have remained unsuccessful. Marc Koska OBE, founder of the SafePoint Trust, originally met with the Hon Prof David Mwakyusa back in March 2010. At this meeting, the Hon Minister gladly accepted the donation of the film from SafePoint, and agreed to create a campaign to air it. But since this meeting, Marc has been met with closed doors and unable to progress with discussions further. For the SafePoint team, it is extremely frustrating, as they are only too aware from their experiences in other countries that public awareness is paramount to the changeover to single-use syringes.

Elections have taken precedence within the Tanzanian Health Authority, with little or no reference given to the unacceptable ‘unsafe injection’ culture. Also this week, Mr Deo Mtasiwa, Chief Medical Officer of Tanzania, stated his belief that no diseases have been spread through injection re-use.

While SafePoint appreciates the positive actions that have taken place in Tanzania to address the problem, such as the training of thousands of nurses, his claim is one that SafePoint rejects. Their view is backed by the announcement at the Annual meeting of The Safe Injection Global Network (SIGN) that a staggering 14% of all HIV infections are a direct result of unsafe injections.

Injection safety needs to move up the agenda, fast. Medical staff urgently need the resources to save lives; not to take them. Cost isn’t the issue - the cost of an AD syringe is 100 Shillings in Tanzania; the cost of a popular soft drink is 500 Shillings. "Mara moja katika maisha, mara nguni ni kifo." A syringe used once is life. Used twice is death.

*Note: The ECSA (East Central Southern African Regions) resolution, passed and proposed by SafePoint in 2007, was signed by all 10 ECSA regions. Countries were to scale up their injection safety programmes by November 2009. SafePoint has already made and donated a public information film, with the support of SafePoint Ambassador, Masanja.

Safepoint is a charity set up with a purpose to educate the next generation in safe healthcare.

This is done by delivering hard-hitting public awareness campaigns. We've done this to huge effect in India in 2008, resulting (April 2009) in the Health Minister mandating the use of Auto Disable (AD) syringes throughout all government-run hospitals. To date, Marc Koska, Founder of SafePoint, has been credited with saving well over 9 million lives.

Tanzania is at the forefront of safe healthcare in Africa and will soon be the second country to convert over to Auto Disable (AD) syringes in the ECSA Region. With their policy already in place, trained healthcare workers and a public information film donated by SafePoint featuring Tanzanian celebrity and SafePoint supporter Masanja, they are ready to reduce the country's medical costs and ease the HIV/Hepatitis disease burden.

We climbed Mount Kilimanjaro to kick off Phase One of this new campaign - the raising of public awareness of the dangers of syringe re-use in Tanzania through all forms of media. We'll be visiting schools, orphanages and hospitals to talk with children, teachers and healthcare workers alike, getting the simple message of ‘one injection - one syringe’ across and donating syringes to kick start their participation in the campaign.

Facts and figures on unsafe healthcare

* Each and every year, due to unsafe injections, there are:

* Some 17 billion medical injections are given each year, and 7 billion of these are unsafe
(Source: Hutin 2003)

* In Africa, 20 million medical injections, contaminated with blood from a patient with HIV, are administered every year
(Source: Reid 2009)

* At least 50% of all injections given, world wide, are unsafe
(Source: WHO World Health Organisation)

* Every 24 seconds, a child dies as a result of an unsafe injection