John Lewis found his calling as a college student at Cal Poly San Luis Obispo, though it wasn’t how you might expect a career path to unfold.

Carmel, CA, May 18, 2017 — John Lewis found his calling as a college student at Cal Poly San Luis Obispo, though it wasn’t how you might expect a career path to unfold.

Flash forward to 2017, as Lewis is now the founder of Lewis Builders, which specializes in designing and building custom homes, doing design/build remodels and “aging-in-place” renovations for retirees, older people and those with health concerns. His firm employs 15 people and moved into new offices in The Barnyard Shopping Center in Carmel.

“We have a passion for helping those who are aging and just want to keep their dignity and independence in their own homes,” says Lewis, who recently added two partners to the firm, Kenny Boyd as Chief Financial Officer and Scott Julian as Chief Operations Officer. “We're trying to educate the public on design/build and aging-in-place.”

Design/build, simply put, is the same company doing the design and construction, from conception to completion, of a custom home or remodel. Design/builders have a better conception of the real costs of a project and how to fit that into a client's budget; it saves significant time in the overall project; and the construction team works collaboratively with the design team.

Aging-in-place is customizing homes with innovative, aesthetically pleasing solutions that alleviate the physical challenges of aging or injury.

It's not just a specialty, Lewis Builders is a credentialed expert in CAPS (Certified Aging-in-Place Specialist). A program of the National Association of Home Builders, the Certified Aging-in-Place Specialist (CAPS) designation program teaches the technical, business management, and customer service skills essential to competing in the fastest growing segment of the residential remodeling industry: home modifications for the aging-in-place.

“When people discover that cost of living in an assisted-living facility can be $10,000 or $20,000 a month, making modifications to their own homes becomes a no-brainer," he says. “The ultimate result is that people are able to live comfortably and safely in their homes into their later years, rather than moving into costly assisted-living facilities.”

Born and raised in Monterey County, the youngest of five children, Lewis’s passion for the creative process of designing and building custom homes and remodels that started with small repair jobs in college, has now become his life's work.

He realized that his passion and talents were for the entire creative process, seeing what others couldn't, taking on challenging design and construction issues, and developing his expertise at flipping homes successfully.

Lewis' first construction job was in 1995 in Salinas, but his first significant project, one that launched him on the “entrepreneurial side of the business,” was in 2002 when he built a small, two-bedroom bed and breakfast unit for the owner of the winery where he worked in Templeton, California.

That project resulted in a referral for another job. It also got him rethinking his career path.

“For the first time I was making more money in construction, than making wine,” he says. But he kept at his viticulture studies and in time he moved to Napa to work at a winery. But he also became a licensed contractor and incorporated as owner of his own firm, JL Home Solutions.

He moved back to Monterey County in 2008, but the recession was hitting the country hard and construction jobs were few and far between, so Lewis started a business as a property inspector.

And in order to establish himself in the community and build a foundation for his construction business that was temporarily dormant, Lewis dove into the business community, taking leadership courses and joining the boards of such agencies as the Central Coast Builders Exchange, Charitable Trust Committee for Monterey County Association of Realtors, Planning Commissioner, Rotarian, and Salinas Chamber of Commerce.

It was as a property inspector that he met one of his partners, Kenny Boyd. Lewis met Boyd when he was tasked to inspect a duplex Boyd had purchased. The two, who both attended Cal Poly and were both majoring in ag business, not only hit it off, they partnered in a real estate project, which lead to more projects, and to eventually becoming partners in Lewis Builders.

Lewis met Julian, who at the time owned his own medical equipment company, through his involvement in aging-in-place design and construction. Julian also recently became a partner in Lewis Builders.

Lewis closest and most intimate partnership was the result of an almost chance meeting at a three-day financial seminar in San Diego. That's where Lewis and his future wife Tammy met when they were involved in a group exercise together.

“We both discovered we had found the one,” says Lewis about the encounter. “We went there to find out about financials and instead we found love.”

John and Tammy were married six months later and they now have two sons, 2 1/2 years old and six months old. And, Tammy, in addition to her primary duties as a mother, is now also Lewis Builders' Creative Director.

Celebrating 40 Years with the Summer of Love

Monterey, CA, May 18, 2017 - The RV Park, located at the north end of the fairgrounds, is encouraging people to get out and explore Monterey County in an RV and to book a space at the RV Park, which is centrally located in Monterey, close to all the attractions such as Fisherman's Wharf, Cannery Row, the Monterey Bay Aquarium, the city of Carmel and Pebble Beach.

With that in mind, the RV Park celebrates the month of May, National Pet Month (the RV Park is pet-friendly); and June, National Great Outdoors Month. 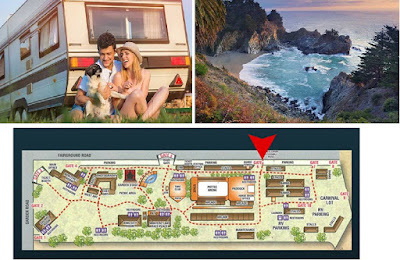 Great Outdoors Week started in 1998 and expanded to Great Outdoors Month in 2004, and aims to encourage more people to get out and enjoy the world around them, simply by exercising or taking part in volunteer programs or instilling in children the importance of outside play and how getting out and about can be part of a healthy lifestyle. There is so much the great outdoors has to offer so, why not get out there and enjoy it!

Please be prepared with the following:
• Extra long sewer hose and power cord in case the plugs are on the opposite side of your vehicle.
• Blocks for leveling — not all sites are level.

For more information, please call the RV Park Camp Host
directly at (831) 717-7167 or email to allison@montereycountyfair.com

Use the promo code “LOVE” during for stays through June and receive 10% savings. For more information, visit montereycountyfair.com/rv-park