Duo’s Forthcoming EP Due Out January 2016

Los Angeles, CA, September 20, 2015 – The dynamic duo making waves in the NYC indie circuit are The Humble Grapes consisting of producer David Kaufman and vocalist Brie Capone. Set to release their brand new highly anticipated single “Young and Alive” September 18th, the talented musicians will also be prepping for the rollout of their forthcoming EP out January 2016. 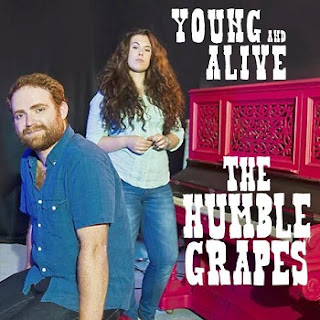 “We wanted to create a fun and upbeat song. Nothing too heavy lyrically, but we love arranging rich and funky bass lines, drum parts and vocal lines. The lyrics speak to a youthful urge to just be, and have fun, something both Dave and I can relate to. The song is about wanting to get out and enjoy life while you can even if you’re young and broke as a window,” states lead vocalist Brie Capone.

“Young and Alive” is an honest depiction of the band’s unique style and music. The duo bring a fresh breath of modernity. Capone's incredibly rich, throaty voice that interplays over David Kaufman's brilliance on the piano into a rock infused, luscious romp through their many original compositions and songs are a joy to listen to and watch.

“Indie rock has melded a lot of genres and styles and Humble Grapes may not be the first to mash up cabaret music and rock but the band adds dashes or blues and classic soul and does it well.” –The Morning Call

The music video for “Young and Alive” will be on the band’s YouTube page September 15th and is directed by Mikhail Torich. Catch The Humble Grapes at The Bitter End in October and November. They will continue playing in the NYC area and have plans to expand touring throughout the tri-state area throughout 2016.

Watch The Humble Grapes “Young And Alive” on Youtube:
https://www.youtube.com/watch?v=vbM0MY8hP0s

For more information about The Humble Grapes or to set an interview, please contact Chip Schutzman at Miles High Productions: 323-806-0400 or chip@mileshighproductions.com

http://www.mileshighproductions.com/
Posted by Straight Line Public Relations at 1:55 AM No comments: Links to this post

Los Angeles, CA, September 20, 2015 — Rock & Roll Hall of Fame inductee Ann Wilson is set to release her first solo EP, The Ann Wilson Thing, on Rounder Records. Featured tracks on the EP include “Fool No More,” which was written by Wilson and described by her as “a heavy blues song about bad love and the fleeting of time” and “For What It’s Worth,” described by Wilson as “a melding of some timeless lyrics with meat, hair and teeth.” The Ann Wilson Thing will be released digitally on September 18 and in stores October 9.

Wilson previously announced her first solo mini tour kicking off September 21 in Solana Beach, CA. Additional dates include The Katherine Hepburn Cultural Arts Center on October 6 and a second show at City Winery in New York on October 7. Alison Krauss and Emmylou Harris with be sitting in with Wilson at her Nashville City Winery date on October 15 and Jon Batiste, the band leader of the Colbert show, will join Ann for a song at the New York City Winery show.

In addition, Wilson’s Hartford, CT show at the Kate Hepburn Theater will be filmed by Connecticut PBS as part of their new “Kate Hepburn Series” and will air on PBS in February.

As a songwriter and lyricist, Ann Wilson has created a truly impressive body of work (“Crazy on You,” “Barracuda,” “Magic Man,” “Dog & Butterfly,” “Straight On”, “Even it Up,” “Mistral Wind,” and many, many more). However, her greatest gift, and first “calling” is singing and with this intimate tour, she prepares to blow away her fans with up, close and personal, raw performances of blues and rock songs. The Ann Wilson Thing won’t replace Heart but it will be a new experience for existing Heart fans, as well as for new fans who will love these songs.

http://www.mileshighproductions.com/
Posted by Straight Line Public Relations at 1:52 AM No comments: Links to this post