Post a Picture for National Smile Month to Win a two-night stay with us!

Monterey, CA, May 14, 2014 - Our beautiful location is just one of the fabulous things about staying at the Hyatt Regency Monterey! June is National Smile Month and to celebrate we are giving you the change to win a two-night stay with us to enjoy the area…now that’s a reason to #SMILE! 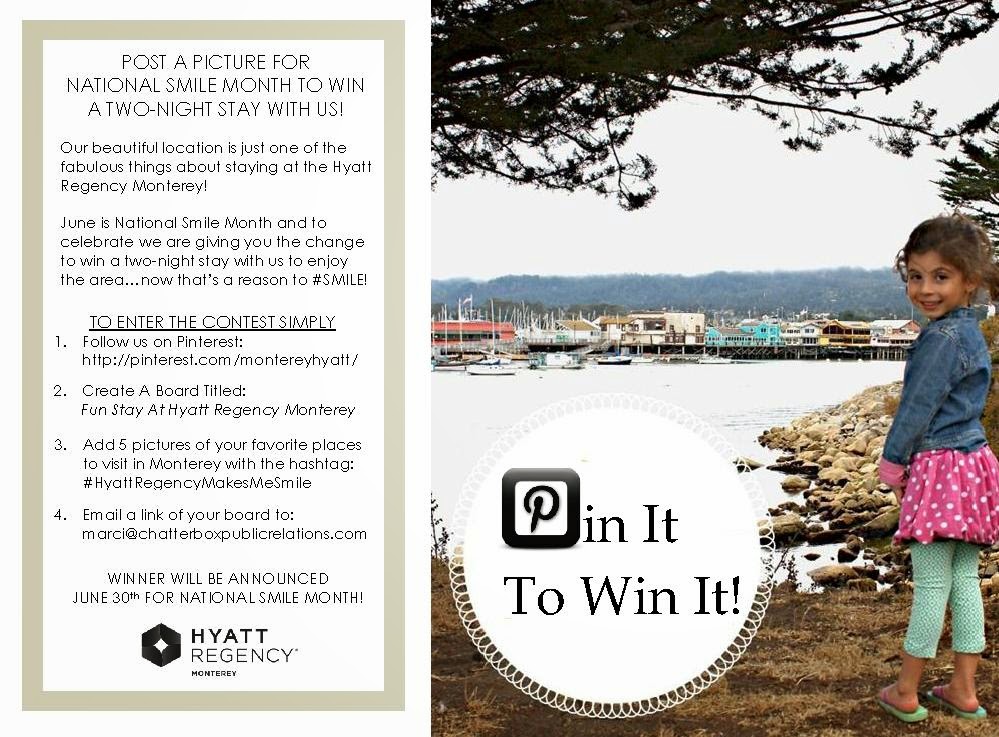 TO ENTER THE CONTEST SIMPLY:

2. Create A Board Titled: Fun Stay At Hyatt Regency Monterey

3. WINNER WILL BE ANNOUNCED JUNE 30th FOR NATIONAL SMILE MONTH

Hyatt Carmel Highlands Launches Pin it to Win it Contest

Post your Favorite Local Hiking Spot and you could Win a two-night stay with us!

Carmel, CA, May 14, 2014 - Our beautiful location is just one of the fabulous things about staying at the Hyatt Carmel Highlands If you’re like us, you love a great hike! Something to make you smile and start your day off right! 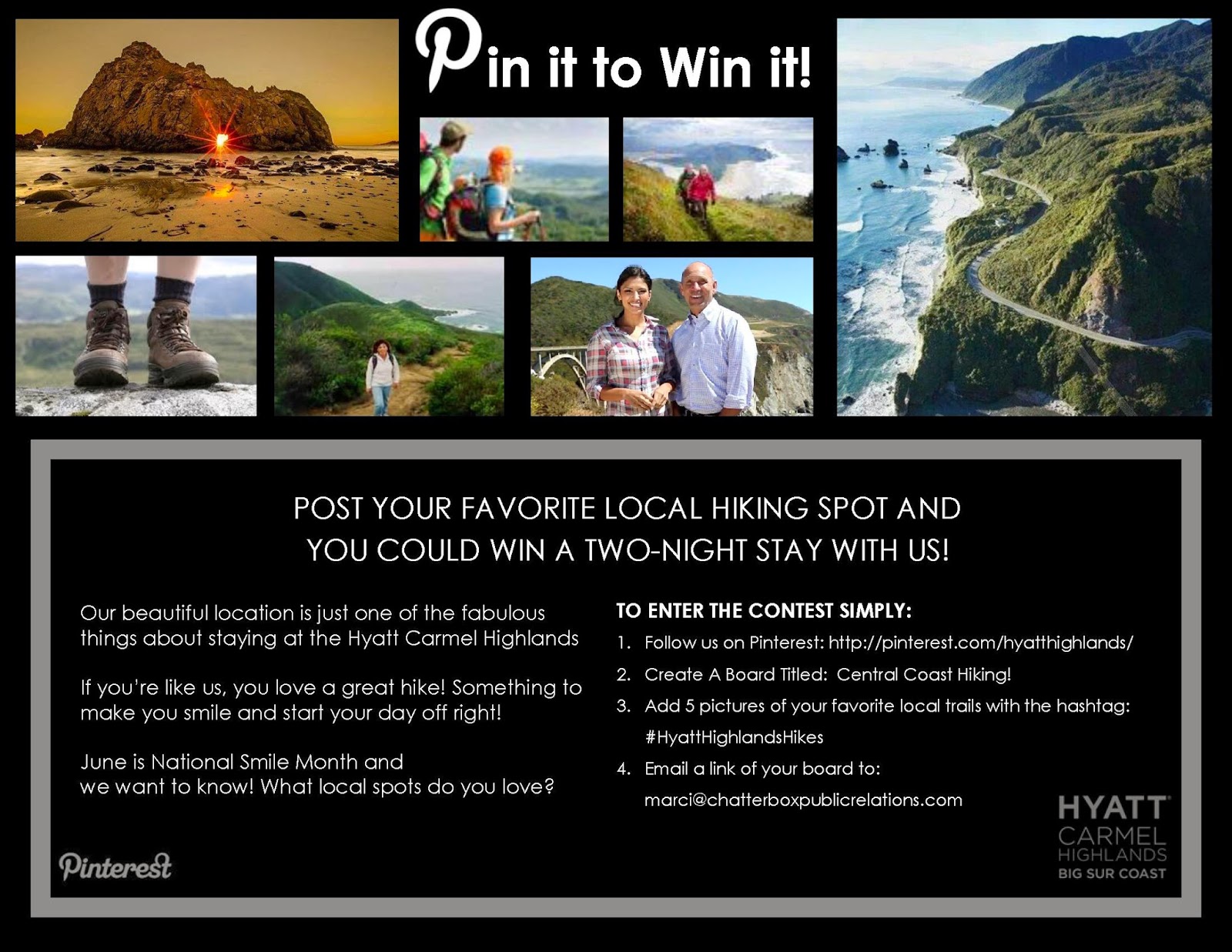 June is National Smile Month and we want to know! What local spots do you love?

TO ENTER THE CONTEST SIMPLY:

3. Add 5 pictures of your favorite local trails with the hashtag: #HyattHighlandsHikes

4. Email a link of your board to: marci@chatterboxpublicrelations.com

Show to Include Several Eras of Celebrity’s Portraits Available for Acquisition For the First Time. Mountainsong Galleries in Carmel-by-the-Sea, California, is committed to representing more OPA and AIS credentialed Master Artists than any gallery in the world.

Carmel-by-the-Sea, CA, May 14, 2014 - Mountainsong Galleries on Ocean Avenue in Carmel-by-the-Sea, California is the place to find more of today's OPA and AIS Master Artists than anywhere in the World. The gallery owners Jonathan and Lucinda Mountainsong have created a friendly, fun upbeat setting filled with contemporary Master Artists, whimsical and dramatic bronze sculptures, stunning glass art and custom wood furniture. Mountainsong represents some of the greatest artists of our time from coast-to-coast.

The gallery announced today its upcoming exhibition:  Portrait Artist Everett Raymond Kinstler presents “Kinstler & Hollywood”. The show will include several eras of celebrity’s portraits available for acquisition for the first time. Kinstler & Hollywood begins June 7 and runs through July 7, 2014 at Mountainsong Galleries in Carmel-by-the-Sea, California. The opening reception is June 7 at 5 pm – 8 pm. 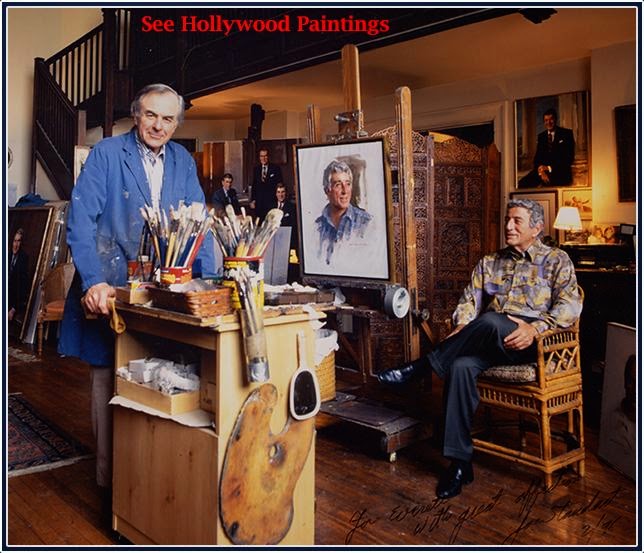 Everett Raymond Kinstler has had the privilege to be the portrait artist to seven U.S. Presidents as well as the Hollywood greats – Katharine Hepburn, John Wayne and Christopher Plummer as well as many contemporary celebrities including Plummer,. Paul Newman, Carol Burnett, Peter O'Toole, Tony Bennett, Clint Eastwood and more. For the past two decades, all of Kinstler’s exhibitions have been at museums including the Norman Rockwell Museum, the Metropolitan Museum of Art, NYC, The Smithsonian and the National Portrait Gallery owns over 100 of his originals. This is the first time that these pieces will be available for acquisition.

At 16 Everett Raymond Kinstler began his career drawing comic books and illustrating books and magazines. He eventually transitioned to portraiture and quickly established himself as one of the nation's foremost portrait artists.  In addition, as a part of the golden age of comic book artists, his work influenced the pop art school. With more than 2,500 portraits to his credit, his subjects include U.S. Presidents and First Ladies, cabinet members, university presidents, business leaders, authors and famous Hollywood figures.

Kinstler's Hollywood portraits are the focus of this solo exhibition. The show explores how the movies influenced Kinstler's art and depict many film personalities who posed for him including Ronald Reagan. The Reagan piece is a life sketch that was done from life during official White House portrait.  The show at Mountainsong Galleries will focus on a series of paintings based off Hollywood greats.

“Motion pictures had a profound influence on my art, as I responded to the visual images accompanying the narrative. Filmmaking and the actors interpreting characters stimulated my imagination and affected my portrait painting, and indeed all aspects of my work including my landscape and figurative art,” says Kinstler.

“My current film series is based on images new and old, real and imagined invented and reinvented. Color and scale, text and context, are part of my attempt to pay tribute to movies,” he says.

Save the Date:  The gallery has announced a series of upcoming exhibitions through December 2014 including a first in the world OPA Masters Only Show in July.

The list of artists who have been juried into this event has not yet been made public.

Please contact Lucinda Mountainsong at 831-626-0600 or Lucinda@mountainsonggalleries.com for additional details.

Humanitarian and environmental company, Sovereign Green Global Australia, has committed to investing in a series of groundbreaking technologies that will assist a number of its projects worldwide.

Burleigh Heads, QLD, May 14, 2014 - The company has made the announcement after carrying out substantial due diligence in relation to the technologies which are being developed by Astra Resources.

The disruptive technologies relate to the process of industrial efficiency, clean energy and fuel saving in road transport and are groundbreaking.

Sovereign Green Global Chairman and Founder, Mr Tony Adams, says the company is pleased and excited that these new technologies will both create substantial changes globally to the power industry, steel making, coal conversion and the cost efficiency of the motor vehicle industry.

“As Chairman and Founder of Sovereign Green Global Australia I fully support Astra Resources and its endeavours to create a cleaner and more sustainable environment for future generations,” Mr Adams says.

“We are also generating a number of humanitarian projects and are proud to announce that the Astra will be assisting Sovereign to complete many of those projects which will assist many developing countries.”

The pinnacle of these technologies is the development in Europe to convert seawater to hydrogen fuel in sunlight.

“Once developed this can have a profound effect on any industry and transport business,” Mr Adams says.

As part of its commitment, Sovereign is recommending Mr Norm Hilton to Astra’s Board of Directors as he has a vast knowledge and expertise in Energy and Corporate Governances.

“Mr Hilton will advise on future development on the company and its many resources in relation to clean energy and technology,” Mr Adams says.

“Mr Hilton will have a substantial impact on the growth and stability of the company in moving forward to a sustainable and lasting future. “