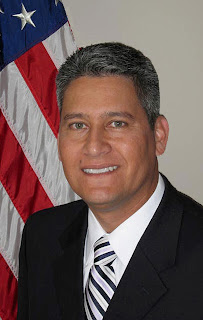 He will address Harrisburg University’s Class of 2011 on Thursday, May 12, during Commencement ceremonies scheduled 6:30 p.m. in the Sunoco Theatre at the Whitaker Center for the Sciences and Arts on Market and 3rd Streets in Downtown Harrisburg.
Cortés served as Pennsylvania Secretary of State from 2003 to 2010 where his portfolio at the Department of State included professional licensure, corporate filings, charitable registrations, notary commissions and sports oversight. He was also the state's chief election official. During his tenure, the department successfully administered 15 primary and general elections and implemented the Help America Vote Act.
Presently, Cortés is the Executive Vice President of Everyone Counts, a global election solutions company specializing in military and overseas voting. As the lead strategic business developer at Everyone Counts, he is responsible for expanding the company’s technology offerings worldwide, including Latin America and the Caribbean.
Cortés was also the first Pennsylvanian to serve as President of the National Association of Secretaries of State, a position he held during the historic 2008 Presidential Election cycle. Under his leadership, the association strengthened cooperative relationships between the states and actively engaged the White House, Congress and federal agencies.
A lawyer by training, Cortés was previously the Senior Advisor for Latino Affairs to three Pennsylvania governors. As the Executive Director of the Governor's Latino Commission, he made recommendations to the governors and their administrations on policies, procedures and legislation that enhanced the status of the Latino community in Pennsylvania. Cortés’ professional pursuits have also included work with the Pennsylvania State Civil Service Commission and the Pennsylvania Department of Public Welfare.
He has been a member of the Interbranch Commission for Gender, Racial and Ethnic Fairness since its inception in 2005. He was also a member of the Subcommittee on Racial and Ethnic Bias that contributed to the Final Report on Racial and Gender Bias in the Justice System. Issued in 2003, the Final Report led to the establishment of the Interbranch Commission. Cortes is currently the Commission’s Chair.
He is been the recipient of numerous awards, including: Hispanic Business Magazine's 100 Most Influential Hispanics in the United States; the National Notary Association’s 50 Most Influential People in Notarization in the Last 50 Years; Multicultural Affairs Congress' Delaware Valley's Most Influential Latino; American Lawyer Media Lawyer on the Fast Track; Central Penn Business Journal's top Forty Under 40 business leaders in Central Pennsylvania; and The Pennsylvania State University Alumni Fellow, the most prestigious award given by the Penn State Alumni Association.
Cortés earned his Bachelor of Science in Hotel, Restaurant and Travel Administration from the University of Massachusetts, a Master of Public Administration from Penn State University and a Law Degree from Penn State Dickinson School of Law. He also holds Doctorate Degrees honoris causa from King’s College, Harcum College and Widener University School of Law.
A native of Puerto Rico, Cortés has lived in Harrisburg since 1990.
Founded in 2001 to address Central Pennsylvania’s need for increased opportunities for study leading to careers in science, technology, engineering and math (STEM) fields, Harrisburg University is an innovative and ambitious private institution that produces graduates who provide increased competence and capacity in science and technology disciplines to Pennsylvania and the nation. Harrisburg University ensures institutional access for underrepresented students and links learning and research to practical outcomes. As a private University serving the public good, Harrisburg University remains the only STEM-focused comprehensive university located between Philadelphia and Pittsburgh.
For more information on the University's demand-driven undergraduate, graduate and certificate programs in applied science and technology fields, call 717.901.5146 or email Connect@HarrisburgU.edu.
NOTE: There is an accent above the e in Cortés.
Contact:
Steven Infanti
HU Communications
326 Market Street
Harrisburg, PA 17101
717.901.5146
Sinfanti@HarrisburgU.edu
http://www.harrisburgu.edu
Posted by Straight Line Public Relations at 9:13 AM No comments: Links to this post

The OC177 DOC™ disk- on-chip solid state drive has a stunningly compact size— less than the size of a U.S. quarter coin—but with capacities up to 32GB or 64GB with a standard IDE or SATA host interface.
Pasadena, CA, March 25, 2011 - Foremay, Inc., a leader of technology innovation in solid state drives and one of the world’s Top 10 SSD OEMs, has today introduced its first disk-on-chip solid state hard drive into its OC177 SSD product family offering. The chip disk is a NAND drive that features a tiny dimension of only 22 x 22 x 1.8 mm. The thin and light, yet robust disk chip is marketed as DOC™. DOC supports standard IDE or SATA host interface, and complies with ATA-7 specifications. Current shipping capacity is up to 32GB with a read/write speed up to 70/40 MB/s. 64GB capacity is expected in Q3’2011. 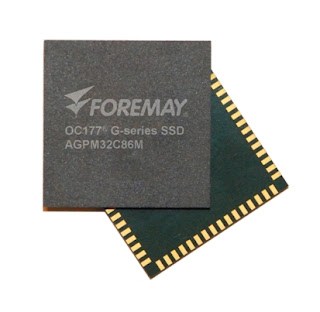 "Foremay’s DOC drive eliminates the need to have a "disk drive" attached to the computer motherboard," said Jack Winters, CTO of Foremay. "The DOC can be soldered directly onto the motherboard via its LGA or BGA pins, which also significantly enhances the anti-shock and anti-vibration performance from DOC equipped computers."
The DOC chip disk is designed for high reliability and rugged embedded computing applications where ultra-compact, ultra-low profile, ultra-high anti-shock and/or ultra-high anti-vibration capability are required. Applications for DOC include:
* Embedded computers and industrial PCs
* Military, defense and aerospace applications
* Rugged laptops and handheld computing machines
* Slim laptops and notebook computers
* MID / Camcorders
* UMPC and netbooks
* GPS navigators
* PMP and gaming consoles
* POS terminals
* Handheld and mobile devices
DOC Availability
IDE/PATA DOC is now shipping in volumes with capacities up to 32GB. 64GB IDE DOC and SATA DOC are expected to be available in Q3 2011. For more information about Foremay’s DOC chip disk, please contact info@foremay.net
About Foremay:
Founded in the Silicon Valley in 2002, Foremay, Inc., is a leading organization dedicated to technology innovation in Solid State Drives ( SSDs ) for high-reliability mission-critical computing, industrial computing, enterprise computing, and high-end personal computing. Foremay's vision is to bring to market reliable, rugged and high-performance solid state drives with "Green Initiatives" in mind. Foremay is headquartered in California, USA. For more information and product details please visit www.foremay.net
Press Contacts : Dennis Eodice, pr@foremay.net, +1 408 228 3468
Foremay®, Foremay logo®, OC177™ and DOC™ and are all trademarks of Foremay, Inc. Any product name of another company or organization mentioned is the property or trademark of its respective owner.
Contact:
Dennis Eodice
Foremay®
225 S. Lake Ave., Ste. 300
Pasadena, CA 91101, USA
Tel: +1 408 228 3468
Fax: +1 408 521 3468
pr@foremay.net
http://www.foremay.net
Posted by Straight Line Public Relations at 9:11 AM No comments: Links to this post