The accompanying music video will also be available on June 3.

Los Angeles, CA, June 02, 2016 – The critically acclaimed jazz collective Sasha’s Bloc has teamed up with the ten-time Grammy-winning vocal group Take 6 to release their new single, “Runaway Blues.” This enticing track blends the big band jazz sound from Sasha’s Bloc with the smooth gospel tones of Take 6 and will be available digitally on June 3. The single’s accompanying music video, which documents the groups’ recording session at the legendary Capitol Records, will also be available on June 3. 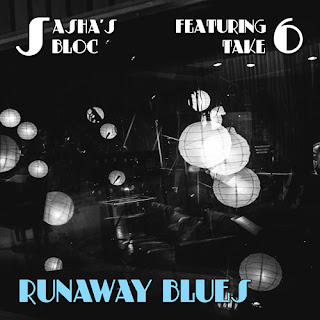 “Runaway Blues” features a sound that is a slight departure from the traditional 1920’s-40’s style big band arrangements that Sasha’s Bloc has become known for. With lead vocals by Take 6 member Alvin Chea and lush harmonies provided by both the smooth voices of Take 6 and the Sasha’s Bloc ensemble, “Runaway Blues” is a jazz, gospel, and blues crossover that is sure to strike a chord with fans of any of these genres. “Runaway Blues” is a story about life, love, and the ability to be honest with yourself. The song was recorded live at Capitol Records, in a room that Sasha’s Bloc bassist and bandleader Alex Gershman describes as “very much alive… It gives you goosebumps to think you were in the same room as legends such as Frank Sinatra.”

Alex Gershman has previously collaborated with Alvin Chea from Take 6, on Sasha’s Bloc’s recent and well-received second album, Heart On Fire. Gershman says that he was thinking for a long time about combining all the elements he loves from jazz, blues, and gospel. When looking for collaborators to make Runaway Blues a reality, Gershman notes that he didn’t have to look far. “[While] writing this song I had Take 6 in my mind all the time,” he says.

The new music video for “Runaway Blues” features the musicians from both groups in the process of recording the track live at Capitol Records. Directed by Alex Chaloff with cinematography by Ricky Chavez, Nick Brosco, and Alejandro Echevarria, the video captures the magic that Sasha’s Bloc and Take 6 brought to the legendary studio.

About Sasha’s Bloc:
An intriguing ensemble founded in 2012, Sasha’s Bloc is an amalgam of varied artists, nationalities and experiences, all fueled by bassist and songwriter Alex Gershman. This collective delivers a sound that is consistently big, boisterous, full of spirit and rich in everything that makes jazz linger as an American phenomenon. The group has played multiple sold out concerts at key jazz clubs in Los Angeles, including Catalina Bar and Grill, Vibrato, Vitello’s, and a sold out show in conjunction with KJazz at the Wallis Annenberg Theater. Sasha’s Bloc has collaborated with such noted musicians as Jane Monheit and Take 6.