Americana/ Alt-Country Group, Angie and the Deserters set to Release New Single, “Country Radio” out May 20, 2016!

Los Angeles, CA, May 19, 2016 - Southern California based singer-songwriter, Angie Bruyere of Angie and the Deserters announces the worldwide digital release of her new single “Country Radio” out May 20, 2016. The alt-country vocalist returns with a highly anticipated refreshing, new Americana sound going back to her roots and a first taste of her new EP, Blood Like Wine scheduled for July 8th release. 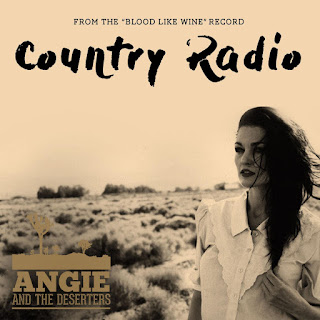 “Country Radio,” along with the rest of the tracks off of Blood Like Wine, were recorded in the famous Castle Recording Studios in Nashville, TN with well-known country producer Jeff Huskins (Keith Urban, Carrie Underwood, Clint Black, Shania Twain). With her stirring, soulful vocals, Angie discusses a sparking infatuation with a prospective lover. Bruyere’s rasp and rawness is what shines through this upbeat, edgy Americana single.

In her youth, Angie Bruyere began songwriting when she started creating music out of her poetry. Known as a dynamic performer, Angie has played in some of Southern California’s premier venues such as Pappy and Harriet’s, Whisky a Go Go, The Troubadour, The Roxy and The Mint. In addition, Bruyere has toured across the United States, through Italy and the rest of Europe. Angie looks forward to continue her touring in support of her Blood Like Wine EP.

The six-song release, Blood Like Wine, will be followed by an additional EP, which includes the second half of Angie’s Nashville recordings and will be released later this year.

In 2014, Angie released West of the Night, which was followed by a Fender sponsorship that featured Angie as Fender’s artist of the month. Along with, two fender sessions of her “Goodbyes” and “Mason Jar” singles.

“Bruyere’s sultry voice stood out, as she possesses a distinctive purr that is both sweet and dangerous at the same time.”-Fender