As an inspiration to us all, the upcoming issue of Rebel Ink magazine, which launches Memorial Day weekend, is portraying two beautiful people on its cover who have overcome tremendous personal challenges.

Paramus, NJ, May 20, 2014 - As an inspiration to us all, the upcoming issue of Rebel Ink magazine, which launches Memorial Day weekend, is portraying two beautiful people on its cover who have overcome tremendous personal challenges. Carrie Jewell Dugo, a breast cancer and double mastectomy survivor, and Alex Minsky, a wounded warrior who suffered serious injuries including the loss of his leg in Afghanistan, have bodies that are considered “non-traditional.” Profiled in depth in Rebel Ink, we revel in how both have regained their self-esteem and inspired others through their unique tattoo experiences. 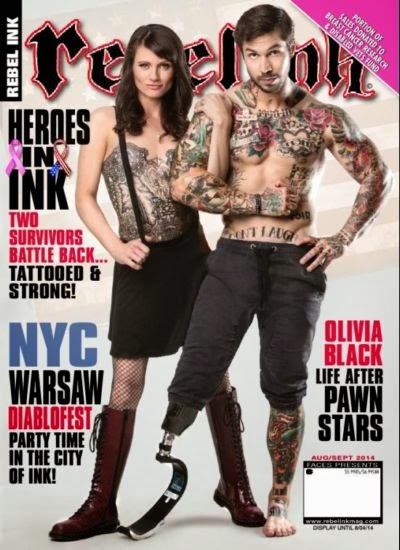 Australian-born Carrie Jewell Dugo was diagnosed with breast cancer during her pregnancy and had a double mastectomy to save the life of her child. Chemo and multiple reconstructive surgeries left Carrie disfigured and scarred physically and emotionally. After dealing with stress, anger, depression and body image issues, she decided that she wanted her children to perceive her as a confident happy Mom. She used the Gerson Therapy for healing, attended spiritual retreats and nutritional weekends. Carrie then decided to help herself and inspire others by having a beautiful corset tattoo applied over her scars by Dawn-Marie of SkinFlower Cosmic Arts, a skilled tattoo artist in upstate New York where Carrie now lives. Inspired by the corset costumes she always admired in a favorite film, Rocky Horror Picture Show, Carrie explains, “For me, getting tattooed was empowering. After every session, I felt my confidence and strength grow. So I am happy people find me inspirational.”

Orange County, CA resident Alex Minsky was a Marine for nearly three years in 2010 when his vehicle ran over an IED (Improvised Explosive Device) while serving in Afghanistan and he suffered serious leg and brain injuries. He was in a coma for 47 days with total memory loss and his leg was amputated. Although he had tattoos prior to entering the Marines, he went to Rick Williams Balboa Tattoo in Newport Beach and Sterling Barck at Costa Mesa Tattoo to obtain more extensive tattoos on his body. While he was working out to regain strength, a photographer approached him, took some photos. Soon after, Alex became a model, totally exposing his athlete blade prosthesis with pride to help others with injuries. Alex explains, “When I struggle, I need something, and I find inspiration from other things. I’m glad people are finding inspiration from other things, and if it’s my picture, then that’s a good thing.”

Tattoos are an art form that date back to 6000 BC and have been gaining more mainstream acceptance in recent years as a visual form of personal expression. According to a Pew Research Center report from December, 2013, the total percent of Americans who have at least one tattoo are 14% or 45 million. There are 21,000 tattoo parlors in the U.S. and Americans spend over $1.65 billion on tattoos.

Founded six years ago, the award-winning Rebel Ink magazine (www.rebelinkmag.com) focuses on many cutting edge aspects of tattoos and the magazine now enjoys a 100,000 circulation. It is available at Barnes and Noble, Target, Walmart, 7-11, Rite Aid and many other retailers, and by subscription. This international magazine celebrates unique tattoos, tattoo artists, and celebrities through interviews and high quality photographs. Rebel Ink is part of the same company that also publishes Urban Ink and Skin & Ink for people of color.

Commenting on the issue that launches Memorial Day, Rebel Ink Editor-in-Chief, Paul Gambino, explains, “We chose Carrie Jewell Dugo and Alex Minsky as our cover models to show the world two tattooed individuals who exemplify courage and used tattoos for their own healing process. We hope it opens the eyes of others to the world of tattoos and how this form of personal expression is an art form like others to be admired...and inspire others.”

Tattoos have been highlighted in numerous recent films including The Girl with the Dragon Tattoo, The Hangover series, and more. Tatoos are seen on numerous actors including Veritas Aequitas in The Boondock Saints, Dolarhyde’s entire backside in Red Dragon, Robert De Niro in Cape Fear, Mila Kunis in Black Swan, Guy Pearce in Memento, in the New Grand Auto Theft video game characters, among many others. Tattoed celebrities include Johnny Depp, Angelina Jolie, Mike Tyson, Dwayne Johnson, David Beckham and Rhianna, among many others. Tattooed models are finally accepted on the runways around the world, allowing the tattoo art form to come out of the closet, so to speak.

Perhaps not to the extent as Carrie and Alex, other military veterans have been tattooed with visible memories of conflict, loss and suffering. Breast cancer survivors have also used tattoos to commemorate their survival and celebrate the fight against breast cancer. More professionals, such as lawyers, doctors, real estate brokers, bankers, now have tattoos. However, some employers still do not allow them to be visible in the workplace.

For more information, go to www.rebelinkmag.com. To schedule an interview, or receive high resolution jpg photos (including many exclusive images not published in the current Rebel Ink article), call Wendy Brickman at (831) 633-4444 or Brickman@BrickmanMarketing.com or call Marci Bracco at (831) 747-7455 or Marci@ChatterboxPublicRelations.com.