Did you know this year Earth Day is celebrating it’s 47th anniversary? In 2020 it will be 50 years!! Each year we learn more about sustainability and Pinterest is an excellent place to share tips from green construction to composting and quotes! Share your favorite pins that represent what Earth Day means to you in our new Pin-It-To-Win-It contest!

To enter the contest simply: Pin It To Win It!

1. Follow us on Pinterest: http://www.pinterest.com/montereyhyatt/
2. Create A Board Titled: Earth Day 2017
3. Add a minimum of 5 of your favorite pins for green construction to composting, quotes and other ways to be “green” with the hashtag #EarthDayHyattRegencyMonterey
4. Email a link your board to: marci@chatterboxpublicrelations.com
5. One lucky winner will receive a two-night stay at Hyatt Regency Monterey!
6. Winner will be announced April 22nd in honor of Earth Day!

With her powerhouse pipes and undeniable passion, Brielle Von Hugel charmed millions of viewers on Season 11 of American Idol, reaching the semi-finals.

After great success with her single “Naked,” Brielle is gearing up to release a brand new remix of her song “Stronger” featuring B.O.B., mixed by House DJs Exodus and Sweet & Sour. The invigorating electronic mix will hit all digital platforms on March 20th, 2017. 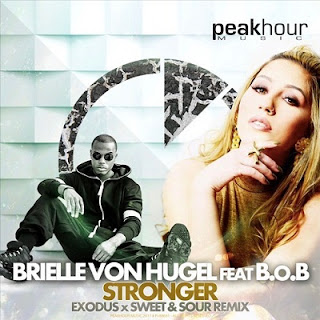 In her latest single, Brielle soars through each verse with airy and sultry vocals that build into a vigorous roar, showcasing the immense range in her voice. “Stronger” drips with pure honesty and passion as Brielle belts “say what you want, take down my walls, so I’ve been through it all; been through the fire. Day by day my flame is getting higher.” The song touches on each individual’s life struggles and ‘growing pains’ that continuously make each person stronger. Billboard charting B.O.B. continues the momentum with an intense and rhythmic vocal delivery. His natural rap abilities flow freely through the verse as he proclaims the obstacles that only make him live longer and push him to be more competitive.

Brielle continues to charm listeners with her unapologetic songwriting and infectious hooks. Her current single, “Naked,” has surpassed 1 million streams on Spotify and is airing on over 40 radio stations! Entertaining Options noted, "A rare artist, Brielle possesses both an astonishing vocal strength and a captivating delicacy. Her voice can stop the world from spinning."

Brielle just finished a North American tour with internet sensation Postmodern Jukebox and will be jetting off to join them again in Europe starting March 20th.