Independent Music Award winning singer-songwriter Rachael Sage is excited to announce the release of CHOREOGRAPHIC (ACOUSTIC), the acoustic and folk-oriented reimagining of her latest album CHOREOGRAPHIC.

New York, NY, July 29, 2016 – Independent Music Award winning singer-songwriter Rachael Sage is excited to announce the release of CHOREOGRAPHIC (ACOUSTIC), the acoustic and folk-oriented reimagining of her latest album CHOREOGRAPHIC. Available on August 5, the acoustic album features ten new versions of songs from the main release, and Rachael’s charming cover of So Far Away, the Carole King classic. 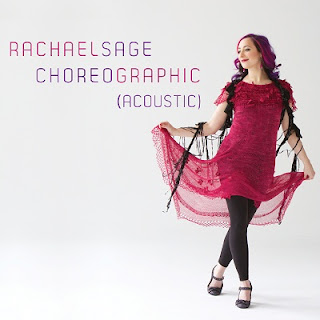 A love letter to her early days as a dancer and also to her more recent collaborators in the world of lyrical dance, CHOREOGRAPHIC (ACOUSTIC) strips back the original album’s layered production in favor of more intimate instrumentation; the lyrics and melodies are front and center in these special Acoustic Radio mixes. The uplifting, harmony-drenched Home (feat. rising artist Matt Nakoa) reflects on the mystery and romance of the big city, while 7 Angels (feat. Peter Himmelman) chronicles the true story of New York’s most tragic fire in years, inadvertently caused by Sabbath observance. The playful, accordion-drenched Loreena was composed by Sage in a dream and nods to her inspiration Loreena McKennitt, and It Would Be Enough was written in honor of the late BB King, whose music crossed every conceivable barrier and who was Sage’s father’s favorite bluesman. The album closes with Rachael’s cover of Carole King’s So Far Away.

Rachael Sage's latest album CHOREOGRAPHIC is a collection of songs inspired by her very first love: Dance. The songs on CHOREOGRAPHIC were all sparked by the singular theme of movement through music, and composed very quickly by Sage during a week-long stint in a London hotel room. A former ballet dancer who attended The School Of American Ballet as a child, Sage learned to play music by ear listening to classical music while performing in such Balanchine ballets as “The Nutcracker” and “Coppélia” with The New York City Ballet; folk and popular influences came much later, but that musical platform was the lifeblood that enabled Sage to write her own songs and make sense of the world around her, from age five.

About Rachael Sage:
Rachael Sage is an award-winning singer/songwriter and producer from NYC who has become one of the busiest touring artists in indie music, performing 100+ dates a year throughout the US, UK and Europe. She has shared stages with Dar Williams, Ani DiFranco, Judy Collins, Marc Cohn, Al Stewart and Shawn Colvin, among others. Her “Choreographic” tour will continue throughout 2016.

Artist Statement: "As a contemporary folk artist inspired by Celtic and Middle Eastern traditions as well as classical music from my ballet career, I’ve always had so much respect for the folk and acoustic community. At heart, I am a storyteller foremost - and it's never been more important to me to be a part of this tradition, weaving my songs about love, loss and renewal into this rich, ongoing fabric."

http://www.rachaelsage.com
Posted by Straight Line Public Relations at 10:32 PM No comments: Links to this post