SWEET HONEY IN THE ROCK, the venerable and Grammy nominated a cappella ensemble who've built a legacy for merging an inimitable and distinct harmonic vocal blend with a veracious commitment to activism, social justice

New York, NY, February 14, 2014 - SWEET HONEY IN THE ROCK, the venerable and Grammy nominated a cappella ensemble who've built a legacy for merging an inimitable and distinct harmonic vocal blend with a veracious commitment to activism, social justice, equality and freedom has announced the launch of the SWEET HONEY IN THE ROCK - 40TH ANNIVERSARY: FORTY & FIERCE 2014 year and kicked off their premiere show at the Zellerbach Auditorium at UC Berkeley, CA. 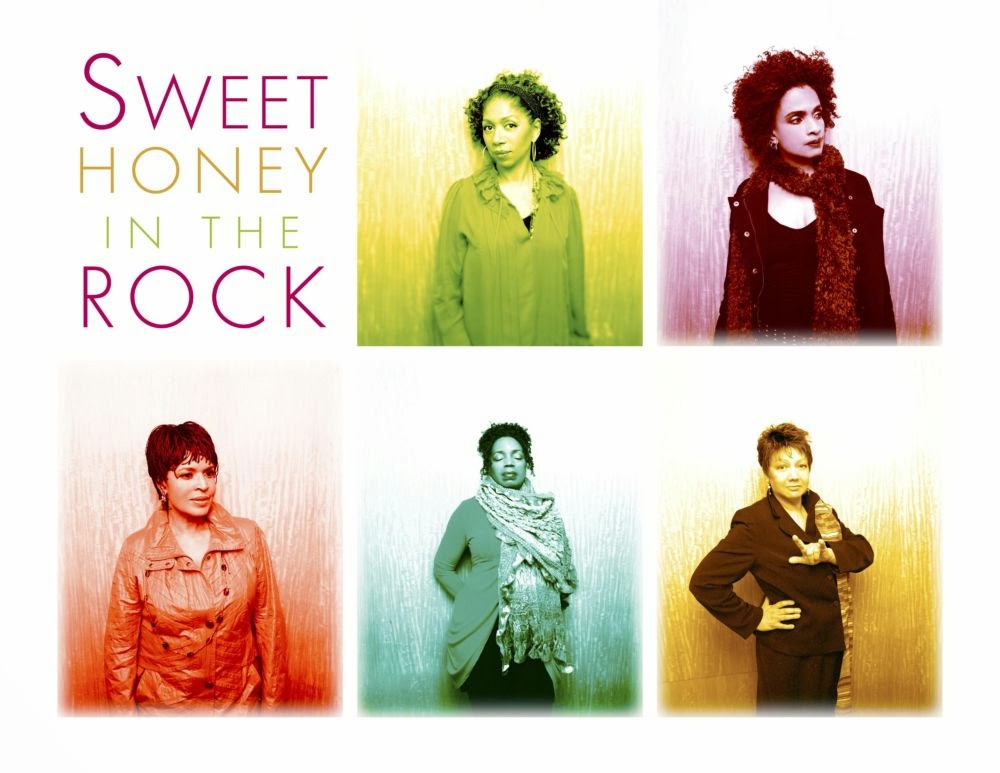 The Berkeley performance kick-offs a West Coast run that also includes performances during Black History month at the Center for the Arts in Grass Valley, CA, 2/15, the Newmark Theater in Portland, 2/17, and The Triple Door in Seattle, WA, 2/18-19. The ensemble will finish up their initial run of dates with performances at the Music Center at Strathmore in North Bethesda, MD on March 1 and as part of the popular Celebrity Series at Symphony Hall in Boston, MA on March 2.

SWEET HONEY IN THE ROCK has configured two different productions to honor and celebrate their 40th Anniversary throughout the year. The enhanced FORTY & FIERCE production (which is being presented at Zellerbach, Strathmore and Symphony Hall) is their most adventurous live performance presentation to date. It's their first fully scripted show with a storyline, which is helmed by noted Director/Choreographer Dianne McIntyre. The show fuses a video projected montage of archival images of the ensemble and poignant historical moments that are woven into a scrapbook and retrospective motif that will be synced to some of the musical segments. Throughout the show each member will also share their own intimate personal stories in dialogue and perform influential songs that have highlighted their incredible journey over the past four decades.

The show will feature Sweet Honey's core members Louise Robinson, Carol Maillard, Nitanju Bolade Casel, Aisha Kahlil and Shirley Childress (American Sign Interpreter) with special appearances by guest vocalist Navasha Daya, bassist Parker McAllister (acoustic upright and electric bass) and percussionist Samuel Turner. Musically, FORTY & FIERCE will rely on the depth of the ensemble's varied repertoire and newly arranged medleys and arrangements of some of their classics. Audiences will also be warmed up and treated to a special pre-show presentation entitled SHE-ROCKS 5 RADIO, that will comprise an audio compilation of their most revered songs. The program is hosted by DJ Merk (Epatha Merkerson) and produced by Louise Robinson and Jordon Maillard Ware.

The more intimate format SWEET HONEY IN THE ROCK - 40TH ANNIVERSARY features the core group and guest bassist Parker McAllister and incorporates some of the storyline and staging elements of the larger production. However, it will not include the same audio visual and lighting components in intimate spaces such as the Center for the Arts in Grass Valley, the Newmark Theater in Portland and The Triple Door in Seattle.

"We're extremely excited and feel blessed to have experienced and enjoyed such longevity, and we're very thankful to all our loyal fans who have stood by us all these years," stated Sweet Honey's Carol Maillard. "They have been the driving force that has fueled all our artistic endeavors, and we're elated and happy to celebrate and share this special show with our fans and show them why we all feel "FORTY & FIERCE."

SWEET HONEY IN THE ROCK began creating its' adventurous and diverse mixture of blues, African, jazz, gospel and R & B music as a quartet in 1973. Formed by Dr. Bernice Reagon (who retired in 2004) the ensemble's patented sound was honed during a workshop at the D.C Black Repertory Theater Company in Washington, DC. Since that time, they have performed throughout the world, including South Africa, Africa, Europe, Australia, New Zealand, Japan, at many of the premiere venues in the United States, released 23 recordings, been featured in documentaries and amassed a distinguished list of honors, awards and accolades.

Last year they successfully launched their first ever fan based fundraising campaign with the Indie Gogo online platform. Funds derived from the campaign have been used to produce the FORTY & FIERCE show. Some of the supporters who made donations were awarded perks including being special guests of Sweet Honey at selected 40th Anniversary Shows. They also toured Europe and Australia, performed at the National Memorial Service for the late Nelson Mandela presented at the National Cathedral in Washington DC and were recipients of distinguished awards by the Search for Common Ground Organization in DC and "The Keeper Of Flame" Award" presented at the national convention and Signature Gala of the Delta Sigma Theta Society in Washington, DC.

In 2012, they performed at the unveiling ceremonies for the Martin Luther King monument on the National Mall. They also debuted their first ever orchestral collaboration, providing the lyrics for composer William Banfield’s “Symphony 10: Affirmations for a New World,” co-commissioned by the National Symphony Orchestra (Christoph Eschenbach, Music Director) and the John F. Kennedy Center for the Performing Arts, Washington, DC; the Minnesota Orchestra, (Osmo Vänskä, Music Director); and the Harris Theater for Music and Dance, Millennium Park, Chicago, released a thought-provoking single and video, “Are We A Nation,” inspired by the controversial immigration law that was enacted in Arizona . The song captured a Gold Songwriter Award from the 27th Mid-Atlantic Song Contest and was featured on an all-star compilation, “Bordersongs,” that raised money for the No More Deaths organization, which provides water and humanitarian aid along the Arizona/Mexico border. Their latest 2-CD set, “A Tribute – Live! Jazz at Lincoln Center,” pays homage to some of the great female African-American vocalists whose songs helped shape the group, including Abbey Lincoln, Odetta, Miriam Makeba, and Nina Simone.

For more information go to: www.sweethoneyintherock.org