“The Flame” is the second installment in the “Cavier Covers” series.

Los Angeles, CA, October 06, 2016 – Pop singer-songwriter Jonathan Cavier has released his version of the classic Cheap Trick song “The Flame” available now on iTunes and other major retail outlets. This single is part of the new “Cavier Covers” series in which Jonathan covers songs that are important to his musical life. The first song in the Cavier Covers series is a faithful rendition of Duran Duran’s “Save a Prayer” also available now. 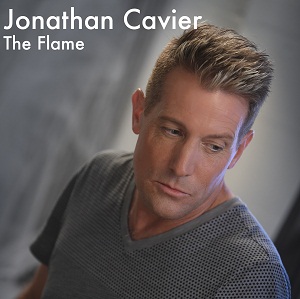 Jonathan Cavier has always been a fan of Cheap Trick and their music has influenced his own in a variety of ways. One subtle page that Jonathan has taken out of the Cheap Trick book is the use of a twelve-string bass on his debut solo album Premier, which was released earlier this year. Tom Peterson, bassist for Cheap Trick, is well known for playing a twelve-string bass, and is even credited as the brainchild behind the instrument’s creation in 1977. As the second song in the Cavier Covers series, “The Flame” gives Cavier a unique chance to highlight this instrument that is so important to the sound of his original music.

Cavier has also recently released a performance video for his new studio song “Promise”, which appears on Premier. The video shows Jonathan in his studio, performing the song with his signature twelve-string acoustic guitar and keyboard setup. You can view the video along with vlogs from Jonathan about various topics on his YouTube channel.

About Jonathan Cavier:
Originally from Northern California, Cavier (pronounced “cav-AIR”) has been based in Phoenix, AZ for several years and up until recently was performing as Alan Clark in atmospheric pop duo EyeTalk. Over the course of ten years and five albums, this venture saw Cavier’s music reach audiences as far-flung as Italy, the UK, and Australia. After five albums and hundreds of shows played throughout the US, Cavier has reimagined himself and has formed a new musical identity on his debut solo album Premier. In addition to his musical endeavors, Cavier is a semi-professional tennis player and a member of the USTA and IFT. Cavier says that practicing and playing in tournaments is like “the fountain of youth.”

For more information, to request an interview, or for a review copy of “The Flame”, “Save a Prayer”, or ‘Premier’ contact:

Los Angeles, CA, October 04, 2016 – Cranky George, the folk-influenced indie rock band featuring actor Dermot Mulroney and co-founder of The Pogues, James Fearnley, will be releasing their debut full-length album, Fat Lot of Good, on October 14. The album will be released in digital and CD formats along with a limited edition of 450 double gatefold albums of heavyweight vinyl, each signed and numbered by the band. The music on the record, while diverse, features common threads such as Cranky George’s signature folk-inspired instrumentation – including accordion, violin, mandolin, acoustic guitars and ukuleles. 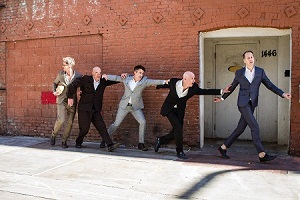 Recorded over a span of five years at Brad’s Seagrass Studio, Fat Lot of Good tips music from the bucket that dredges the confluence of the Danube, the Shannon and the Missouri. The album embraces fourteen songs, individually divergent, but which together ply a course from haven, round horn and back to harbor, by means of lullaby, torch song, sea shanty and murder ballad – an album which, with compassion, irony, humor and sometimes horror, tells stories of desire, love, loss, cruelty, ruination and pity.

One highlight of the album is the first single, “Nighttime” which draws from a variety of influences including legendary Canadian indie rockers Arcade Fire and is available now. Cranky George describes “Nighttime” as “Big in the way that Coldplay is big,” and says that the song is “A siren call for lovers – for anyone who's ever slept beside someone they loved and wished the night would never end.” Featuring Kieran Mulroney on vocals, the song is a mid-tempo song from the heart and draws equally from groups as diverse as Elbow, The Decemberists, Coldplay, and Band of Horses while incorporating dripping guitars and horns at the climax. The accompanying music video features the five members of Cranky George as they perform the song and interweaves the story of a woman in distress, pining and longing for a lost love.

Watch the Video for “Nighttime” Here

As a perfect foil to the effervescence of the musicianship in Cranky George, the band’s blend of vocal harmonies, its cross-graining of voices – James’s chiselly drone, the honeyed timbre of Sebastian’s voice, Brad’s incisive falsetto, the Mulroney brothers’ baritones – Kieran’s urgent, Dermot’s lusty – is as sturdy as marine plywood.

About Cranky George:
Los Angeles based Cranky George has brought together members and musical styles from both sides of the Atlantic to create a unique take on folk-influenced indie rock that is as special and diverse as the members themselves.

James Fearnley, co- founder and accordionist for the London-Irish folk-punk band, The Pogues, and the Mulroney brothers, Kieran and Dermot, siblings from a large, Irish-American family from Alexandria, VA, first came together as neighbors in Hollywood, California. While both of the Mulroney siblings are known for their work on and behind the screen with movies, they are both classically trained musicians; Dermot on the cello, mandolin, and guitar and Kieran on violin, ukulele, and tenor guitar. In 1994, they formed the LA based band, The Low and Sweet Orchestra, which released an acclaimed record, Goodbye to All That, on Interscope Records in 1996. After The Low and Sweet Orchestra split, both Mulroney brothers and Fearnley formed the Cranky George Trio.

During this time, Brad Wood, who has produced records for artist from the likes of The Bangles, Ben Lee, Pete Yorn, and Veruca Salt, was added on bass. To round out the new line up of Cranky George, Sebastian Sheehan Visconti, a sound designer and sound effects editor who notably worked on the television series The Muppets and The Flash, joined on percussion. After five years of work, Cranky George’s full-length debut – Fat Lot of Good – will be released on October 14, 2016.

For more information, to request an interview, or for a review copy of ‘Fat Lot of Good’ or “Nighttime” contact: