Christina Moss Naturals all organic and 100% natural skin and hair care line actually works. They have review after review on their website of customers that have had excellent, and even amazing, results with these products.

“Does your facial moisturizer contain hidden chemical fragrances that are disrupting your hormones and causing cancer?*

“Is your facial moisturizer being preserved with ingredients that mimic estrogen, a primary problem in the development of breast cancer?** 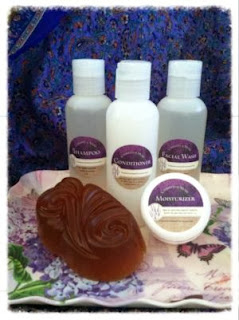 “While the idea of eating facial moisturizer is a disgusting concept, the fact is, we may be doing severe damage to our insides by smearing it onto our skin. That’s because there are chemical ingredients in most mainstream facial moisturizers (and other cosmetics) that absorb through the skin and into the bloodstream at a rate that is estimated at 10 times the concentration of an oral dose!***

“It took me eight years to develop my formula and my hard work has really paid off. Christina Moss Naturals Moisturizer is naturally anti-aging. It gently smoothes out fine lines while it moisturizes with emulsified organic oils and glycerin that help replenish the skin without blocking pores. - Christina Moss”

Christina Moss Naturals all organic and 100% natural skin and hair care line actually works. They have review after review on their website of customers that have had excellent, and even amazing, results with these products. They even guarantee their products and your satisfaction. They can be found on their website and on Amazon.com

If you would like to learn more about Christina Moss Naturals organic & all natural skin and hair care products, you can contact Christina Moss at christinabodina@gmail.com or visit her website at www.ChristinaMossNaturals.com. You can also reach her by phone at 818-843-3427 or by mail at 1229 N. Lamer St, Burbank, CA. 91506.

For more information and where to find Christina Moss Naturals products, go to:
Amazon: http://www.amazon.com/s/ref=bl_sr_beauty?ie=UTF8&field-brandtextbin=Christina+Moss+Naturals&node=3760911

References: *Scientific American, Scent of Danger: Are There Toxic Ingredients in Perfumes and Colognes? **Prevention News, Parabens: The Dangerous Preservative in Cosmetics ***Made From Earth, Harmful Ingredients in Skincare Products.

Baltimore, MD, November 23, 2012 - What Black Friday and Cyber Monday are to the retail world, #Giving Tuesday (December 3, 2013) is quickly becoming for the world of philanthropy, and this growing grassroots movement is having an impact on non-profits throughout Maryland. Race Against Abuse of Children Everywhere (RAACE), a Maryland non-profit dedicated to the prevention of child sexual abuse, is one of #GivingTuesday’s newest partners.

RAACE, a 501(c)(3) non-profit organization, was founded 10 years ago by Baltimore businessman Kenneth Smith. The organization’s mission is to raise public awareness and provide age-appropriate educational tools to help families protect their children.

Child sexual abuse statistics are at epidemic proportions — 1 in 3 girls and 1 in 7 boys are sexually abused by age 18 — yet the topic is vastly under-discussed. The silence is caused in part to the fact that over 90% of the perpetrators aren’t strangers, but are someone the child knows and trusts.

There are 39 million survivors of child sexual abuse in the U.S and most never have the chance to share their story, an action that can be an important part of the healing process for some people. As part of #GivingTuesday, RAACE will offer survivors the opportunity to tell their story, anonymously if they prefer. Survivors can email or send a letter to RAACE and members of the organization will record and post their stories on its social media outlets, giving survivors a voice and bringing their experiences out of the shadows.

“Exposing the prevalence of abuse and educating people are first steps towards preventing it," explains RAACE founder Kenneth Smith. “That’s why we’re sharing survivors’ stories and why we stage our annual ‘prevention tour’. We travel around the region to family-friendly events and we use our two-story, carnival-style "Big Wheel" to catch the attention of event-goers and teach them how they can help prevent child sexual abuse.”

RAACE is a #GivingTuesday partner for the first time this year to help fund its prevention tour and spread the word about ways to prevent children from becoming abuse victims. The #Giving Tuesday movement started in 2013 as an innovative approach designed to transform how people think about and participate in the giving season that coincides with the winter holidays. #GivingTuesday takes place on the Tuesday after Thanksgiving, this year on December 3, 2013.

“Rather than focusing all our energies on holiday sales and shopping, #GivingTuesday reminds us what the holidays are really about—caring for and sharing with others,” adds Smith. “It’s a great way to shine the spotlight on the many, many ways we can each help people in our own community, around the country and across the globe.”

For more information about RAACE and its partnership with #GivingTuesday, visit www.raace.org.

National study, from the third quarter of 2013, also notes an increase in alternative fueling stations and ranks the top states in energy efficiency

Denver, Colo, November 21, 2013 - Ecotech Institute’s Clean Jobs Index, a tool to compare states’ use and development of clean energy, found more than one million job postings in the clean energy sector from July 1, 2013, through September 30, 2013. This shows a 54 percent increase in needed clean energy employees, evidence that the sector is rapidly growing and in need of experts.

Ecotech Institute, the first and only school dedicated to educating students solely in clean energy fields such as solar, wind and renewable energy, launched the Clean Jobs Index in January 2013 to provide objective job information about the clean tech industry. The Index also looks at various sustainability factors such as alternative fueling stations, LEED projects and total energy consumption in all 50 states. The Clean Jobs Index defines a clean tech job as one where workers make their business more environmentally friendly, use fewer natural resources or produce goods or provide services that benefit the environment.

States With the Most Alternative Fueling Stations (Per Capita):
Hawaii, Oregon, Washington and Tennessee

In Q3, Ohio Moved From 24th in Energy Efficiency to 2nd in the Nation

States With the Most Incentives for Sustainability and Renewables (in no particular order):
California, Texas, Minnesota, Washington and Oregon

*(Rhode Island added more incentives and rebates than any other state in Q3.)

“This data shows a long-awaited boom in the clean tech industry, from the increases in alternative fueling options to a massive amount of clean job opportunities,” said Kyle Crider, Ecotech Institute’s Program Chair and Manager of Environmental Operations. “States now offer more sustainability and renewable incentives than we’ve ever seen before, which proves that they’re taking the power of the industry seriously. In the state of the current economy, over 1 million job opportunities is a truly incredible statistic. We’re proud that Ecotech is the only higher education institution out there devoted entirely to helping students become successful professionals in this rapidly expanding sector.”

Ecotech Institute’s Clean Jobs Index is an aggregation of statistics by state, developed on a number of factors. LEED projects, energy efficiency, green pricing, net metering, total energy consumption and alternative fueling stations are all considered when ranking states. Higher index numbers suggest a state’s propensity to embrace renewable energy and energy efficiency. It may also indicate a greater possibility for employment in that local clean economy sector, though the Clean Jobs Index in no way indicates the presence or the promise of any specific job opportunities. Data is gathered regularly from independent research entities including: American Council for an Energy-Efficient Economy, Database of State Incentives for Renewables & Efficiency, U.S. Energy Information Administration, U.S. Department of Energy and the U.S. Green Building Council.

IEP Technology and Delphi Automotive are working collaboratively to develop this innovation and have executed a Memorandum of Understanding under which Delphi Automotive expects to integrate solid oxide fuel cell (SOFC) technology into GFCs.

The unit was shown in October during the 33rd Oil Shale Symposium presented by the Colorado School of Mines and the Colorado Fuel Cell Center (CFCC). Initial testing led by Dr. Neal Sullivan, Ph.D., an associate professor at Colorado School of Mines and director of the CFCC, proved that the GFC can be operated at the high temperatures needed to heat oil shale formations to produce oil in situ or in place.

“This is an exciting opportunity for all involved. It’s a true collaboration between IEP Technology (IEPT), Delphi and the CFCC to test the full-feature GFC prototype. We are bridging theory to industrial use in an exciting new way at our lab,” said Sullivan.

The multi-stack, full-featured GFC module follows successful testing of a single stack GFC in April 2013. This is the second major technology milestone IEPT has met with relative ease.

“We could not be happier to meet this second milestone with such success in proving our multi-stack, full-featured GFC module. Our next major step will be to couple and test multiple modules in the lab in preparation for our in-ground, pre-field testing at a location on Colorado School of Mines property,” said Mark Wall, IEPT’s Manager of Projects.

IEPT selected Delphi’s SOFC as the most advanced and production-viable stack available today. Delphi’s SOFC converts chemical energy in conventional fuels directly into useful electrical power and heat without combustion, resulting in minimal emissions. Electric heaters have been used to extract oil from shale in situ, but IEPT’s concept has the potential to be much more efficient and does not require a dedicated electrical power plant.

Delphi has designed SOFCs and completed development projects to generate electric power for commercial vehicle auxiliary units, stationary and military applications. Delphi is committed to applying its SOFC technology to green energy applications such as the GFC, and brings years of automotive component manufacturing and system integration experience to support IEPT in developing its technology for oil shale production applications.

“Beyond the application of extracting oil from shale, we have always envisioned multiple uses for the GFCs such as fresh water production from brackish underground aquifers and landfill pyrolysis in addition to the in situ production of unconventional hydrocarbons,” said Al Forbes, IEPT’s president and CEO. “Delphi’s ability to engineer and adapt its existing SOFC technology to GFC applications, manufacture on a volume basis and distribute globally will go a long way in making this a reality.”

The in-ground testing of the full-feature GFC modules scheduled for 2014 on Colorado School of Mines property will include the in situ installation and operation of multiple GFC modules. It will also test all related equipment for fuel conditioning and supply and power management for the green electrical power produced as a byproduct of the GFC applications.

About IEP Technology
IEP Technology (IEPT) is the owner of the patented, breakthrough in-situ Geothermic Fuel Cell™(GFC™) system. GFCs create heat for use in the recovery of unconventional hydrocarbons while producing additional energy to be sold back into the market as clean, baseload electricity. IEPT is currently focused on the economic and environmentally responsible recovery of oil shale and oil sands. The company holds exclusive rights to broad, patented GFC technologies in the U.S. and Canada, and has strategic partnerships with Uintah Resources, Inc., Delphi Corporation and Colorado School of Mines. Learn more about the company and its technology at Iepm.com or IEPTechnologyInc.com.

About the Colorado Fuel Cell Center at Colorado School of Mines
Colorado School of Mines, www.mines.edu, is a uniquely focused public research university dedicated to preparing exceptional students to solve today’s most pressing energy and environmental challenges. Founded in 1874, the institution was established to serve the needs of the local mining industry. Today, Mines has an international reputation for excellence in engineering education and the applied sciences with special expertise in the development and stewardship of the earth’s resources.