Monterey, CA, December 15, 2014 — The 69th season of the Monterey Symphony continues into Spring 2015 with a brilliant range of classical performances sure to astound you! International guest artists will perform colorful works with the Monterey Symphony orchestra on the stages of Sherwood Hall in Salinas and Sunset Center in Carmel-by-the-Sea. Mini-series subscriptions are still available for the remaining four concerts in Spring 2015, along with a three-concert FlexPass that allows you to choose concerts up to the day of the event subject to availability.

Mini-series subscribers are assured the best seats available, free ticket exchanges, and VIP privileges. Celebrate this colorful season with the Monterey Symphony, along with the 10th Anniversary of Music Director and Conductor Max Bragado-Darman.

The Spring 2015 repertoire blooms with Spanish pianist, Joaquin Achúcarro, in February, and Icelandic violinist, Judith Ingolfsson, in March. The fifth concert in April, Majestic Realm, alludes to the nostalgia felt for our homeland, with what is certain to be a spectacular performance by violist Roberto Díaz, President of the Curtis Institute of Music and former principal violist of the Philadelphia Orchestra. The season closes in May with a flamboyant, all orchestral grand finale, Invitation to Dance. Without question, The Colors of Music has something for everyone. (Schedule and details below) 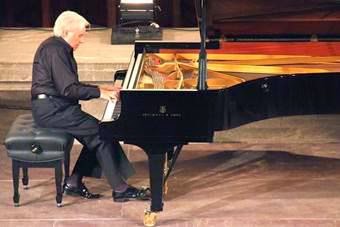 * February 20, 21, 22, 2015
* Rachmaninoff’s Rhapsody is an immensely popular work, featuring the acclaimed talents of Achúcarro, and promises to be a performance not to miss. Dvorák’s Symphony No. 7 is considered by many to be one of the finest examples from the golden age of the symphony.

His international career was launched with his victory in England at the 1959 Liverpool International Competition and subsequent debut with the London Symphony, and from that time, he has maintained an uninterrupted concert schedule. Since 1989, Achúcarro has held the specially endowed Joel Estes Tate Chair in piano at Southern Methodist University in Dallas, Texas, adjusting his teaching periods to his busy performance schedule. He is also a Professor at the Summer International Courses of the Accademia Musicale Chigiana in Siena, Italy.

He has received Spain’s highest honors in the arts including the Premio Nacional de Música, the Gold Medal of Fine Arts, and the Great Cross of Civil Merit honoring his lifetime achievement. He was also named “Artist for Peace 2000” by UNESCO and “Beloved Son” by the city of Bilbao, and received the “Universal Basque” awarded by the Basque Government.
Source: http://joaquinachucarro.wordpress.com

Pre-Concert Lecture Series: All concerts will feature a free pre-concert lecture at the concert hall one hour prior to the performance. These lectures, provided by Dr. Todd Samra, offer intriguing facts and historical context about the composers and the pieces to be performed, which greatly enhance the concert-going experience. To learn more about Dr. Samra, visit: http://www.montereysymphony.org/?attachment_id=3832

To purchase tickets or a mini-series subscription, call 831-646-8511 or visit http://www.montereysymphony.org/current-season/ for season details.

Enjoy the best of harmony for your ears, and flavor for your palate, with the Monterey Symphony Supper Club! Share your love of classical music with fellow patrons over three-course dinners and hand-selected wines. Local restaurants that are hosting the Monterey Symphony Supper Club this season include: Vesuvio, Portobello’s, Andre’s Bouchée, Il Fornaio, La Dolce Vita, Gino’s, and Anton & Michel. For reservations, call 831.646.8511 or visit http://www.montereysymphony.org/special-events
Upcoming Spring 2015 Concerts:

Concert VI: Invitation to Dance
*  May 15, 16, 17, 2015
*  The work on this program that will surprise and thrill is the Ginastera, which may incline our audiences to not sit still...with encore appearances by Weber, Dvorák, and Rachmaninoff, featuring stylized dances of immense beauty and energy.

Contact the Monterey Symphony Box Office at 831-646-8511 or email ticketing@montereysymphony.org to purchase tickets or for more information regarding discounted group, student and military rates.

The mission of the Monterey Symphony is to engage, educate and excite our community through the performance and continual discovery of symphonic music.

The Monterey Symphony, under the artistic leadership of Music Director & Conductor Max Bragado-Darman, is the only fully professional, full-season orchestra serving the communities of the Monterey Bay, Salinas, Salinas Valley, Big Sur, and San Benito County. It provides triple performances of a six-concert subscription series at Carmel’s Sunset Theater and Salinas’s Sherwood Hall, as well as youth education programs that include visits to classrooms by musicians and culminate in full-orchestra concerts for schoolchildren.